John Loughrie, fan of Margaret Thatcher on the steps of St Paul’s Cathedral.

Love her or loathe her, the funeral of Baroness Thatcher was an extraordinary occasion.  The streets were packed with thousands of people who gathered to watch her final journey from the Houses of Parliament to St Clement Dane’s and on to St Paul’s Cathedral for the service attended by over 2000 people.   Joint military forces lined the route and accompanied the coffin for the biggest funeral for a political leader since Winston Churchill.  HRH The Queen even broke with Royal Protocol to attend the event with The Duke of Edinburgh.

Dress code was ‘Full day ceremonial without swords’ (except for Roger Gifford, The Lord Mayor of London who entered the Cathedral carrying a ceremonial mourning sword dating from the 1500s – a big day for our Lord Mayor!).  ‘Morning dress or dark suit’ for the men and for the ladies ‘day dress with hat’.  David Cameron still making a point of not being seen in tails and his wife Samantha wore a hat! 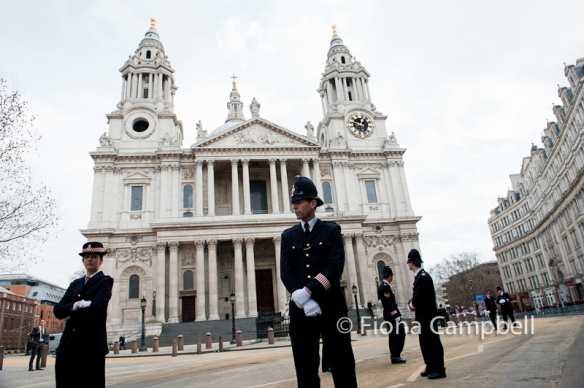 Crowds lined the street, people poured out of their offices and I found myself watching the latecomers enter the cathedral from Paternoster Square leaving the ‘money shots’ to the press photographers.  Joan Collins OBE (nearly 80!), Sir David Frost, Kt. OBE, Sir Norman Foster OM, ‘captains of industry’, ageing politicians once so familiar, Rolls Royces, bear skins, Chelsea Pensioners,  bands playing, bells ringing… and the ‘after party’ back at the Guildhall.

The Band of the Welsh Guards. 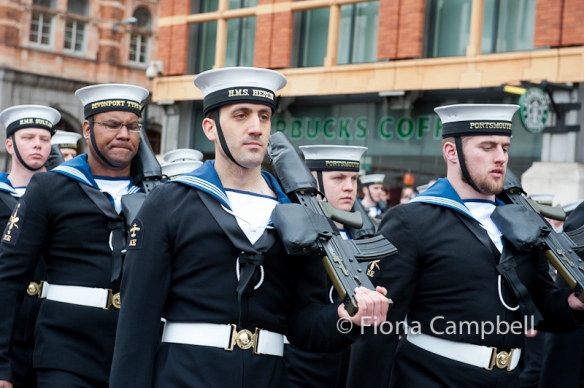 The Royal Navy representing the ships deployed to The Falklands.

The muffled drums of The Royal Marines.

The Welsh Guards (note 5 buttons on the uniform).

Protestors making a stand by turning their back to the procession – wearing red ribbon to indicate that they are not mourning the passing of Baroness Thatcher.

Border terrier. Shoes to the left belonging to a Falklands veteran.

Members of the public watching the congregation leaving St Paul’s from the side entrance. Everyone’s a photographer! 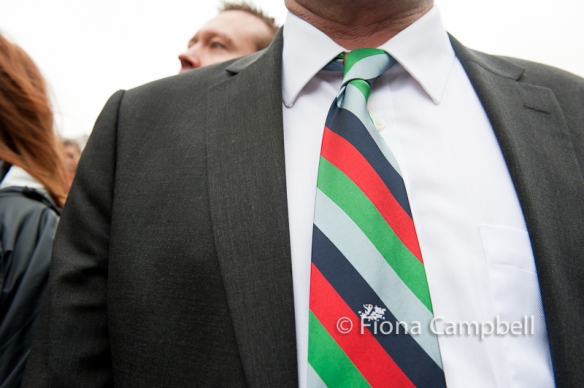 Margaret Thatcher was a great supporter of The Chelsea Pensioners who formed a funeral guard of honour on the steps of St Paul’s. 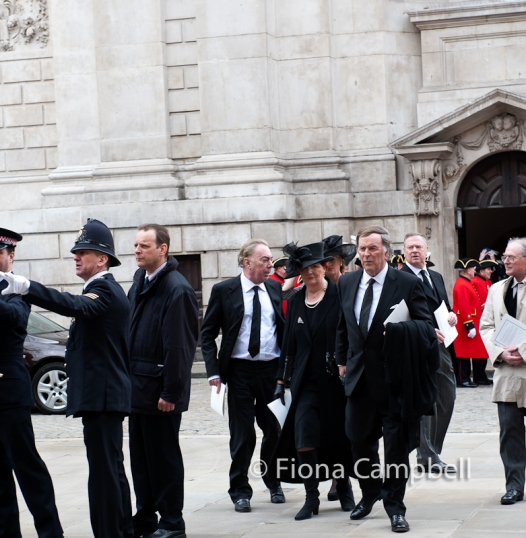 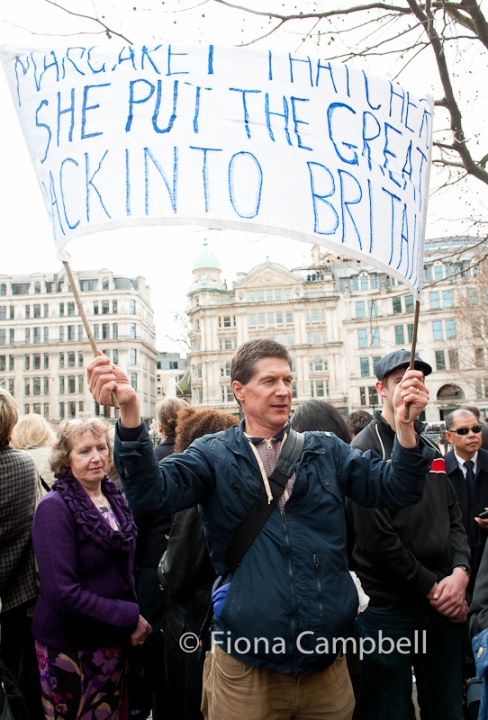 Banner reads ‘Margaret Thatcher. She put the Great back into Britain’. 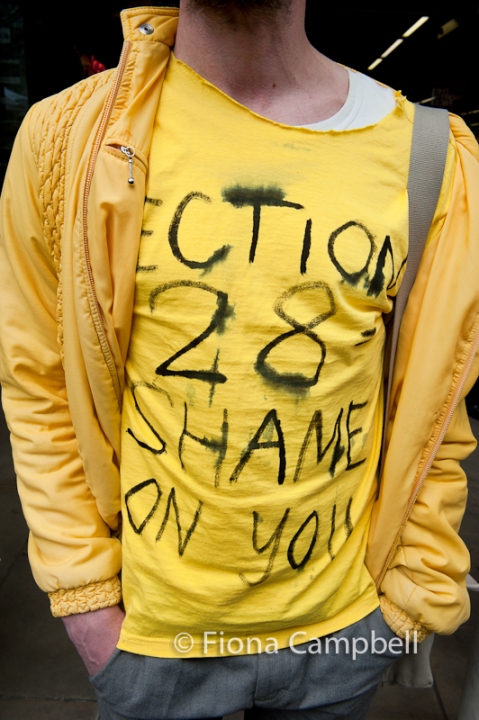 ‘Section 28. Shame on You’, referring to a controversial amendment to the 1986 government act stating that a local authority “shall not intentionally promote homosexuality or publish material with the intention of promoting homosexuality” or “promote the teaching in any maintained school of the acceptability of homosexuality as a pretended family relationship”

After the service, funeral goers repaired to The Guildhall for a reception to honour her memory.

The Guildhall, home of the City of London.

Guests leaving the Guildhall reception (background car belongs to the Mayor of Westminster). 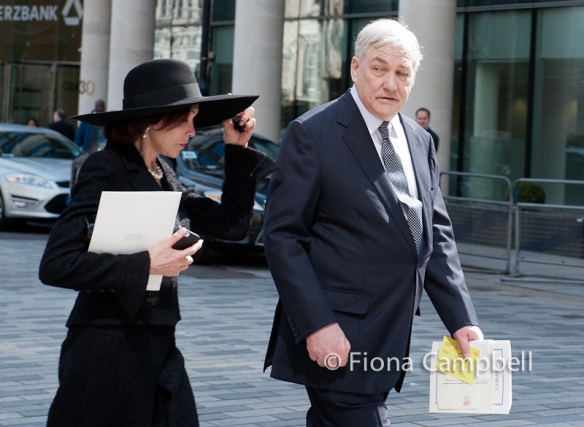 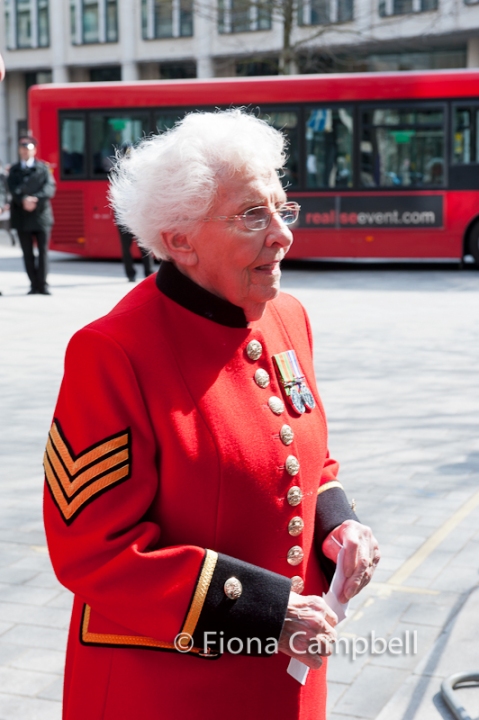 Dorothy Hughes, 85 (the first lady to be admitted as a Chelsea Pensioner in 2009) formed part of the guard of honour for the service at St Paul’s.

Lady Mayor of Grantham. Went to the same school as Baroness Thatcher. The Grantham Museum which is normally shut on Wednesdays opened its door for a screening of the funeral.

The Company of Pikemen and Musketeers outside The Guildhall. 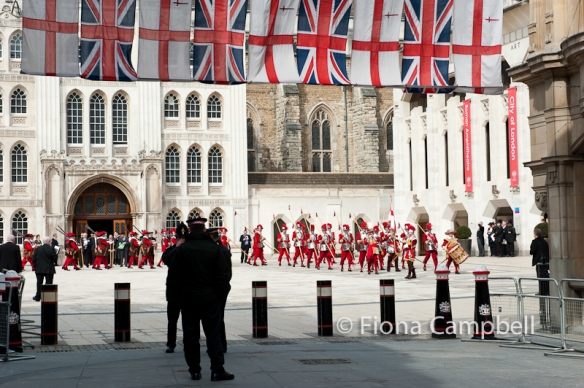 About turn for the Company of Pikemen and Musketeers as they head back to the Honourable Artillery Company.

Check the Musketeer on the right… 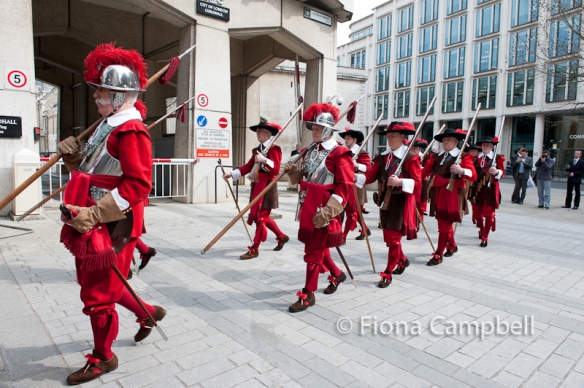