Queues round the block on day one of the show that is 'Leonardo da Vinci: painter at the Court of Milan'.

The National Gallery has opened its doors  for their ‘blockbuster’ Leonardo Da Vinci show which features more than 60 paintings and drawings exploring his time in Milan (1482-1519) when he became court painter to the city’s ruler, Ludovico Sforza.

With Sky Arts broadcasting live from the party (an unprecedented broadcasting experiment at 80 minutes no less and shown cinemas nationwide); Rachel Campbell-Johnson on the front page of The Times describing how she was moved to tears, calling it ‘the best show ever’; others describe it as a ‘landmark’ show, ‘exhibition of the century’ and an ‘opportunity of a lifetime’ this certainly is a hot ticket.  In his effusive Sunday Times piece, Waldemar Januszczak was so taken by Leonardo’s depiction of women, he stated that should such a fine form of a woman fall into any of the canals Leonardo designed for Milan, he would happily jump in after her (note he’s a non-swimmer)…  The exhibition is deservedly drawing in the crowds and tickets are sold out well into the new year.

Art lovers wait patiently to see the works of the great master, Leonardo.

Leonardo clearly thrived under the patronage of Sforza and the period in Milan was the most productive period of his career.  The National Gallery writes of the artist: ‘His perfectionist and easily distracted nature made him ill-suited for freelance work’.   The Gallery has brought together nine paintings by Leonardo (some in unfinished states – like the best of us, he sometimes had trouble finishing his projects) out of 20 paintings attributed to him.  The show also features paintings and other works by Leonardo’s pupils. 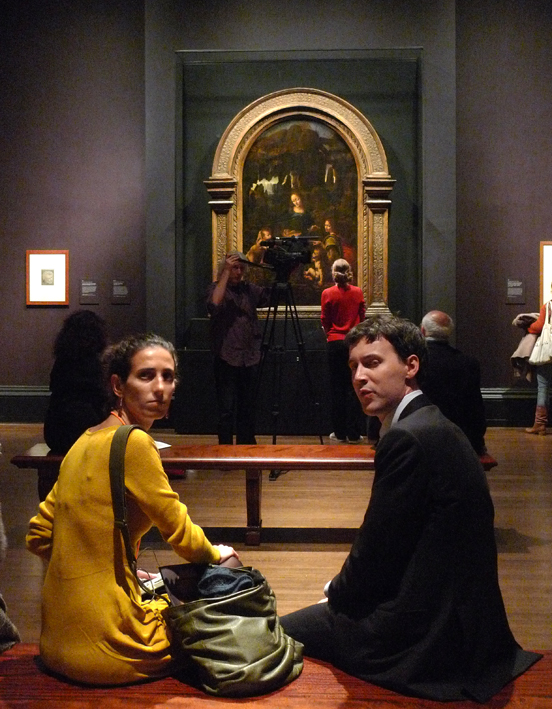 Curators comparing two versions of Leonardo's 'Virgin of the Rocks' which are hung opposite each other. In picture is the version (uncleaned) from the Musee du Louvre behind perspex which is opposite the National Gallery's much cleaner (some say overcleaned) version. This is the first time in history that the paintings have been shown together. 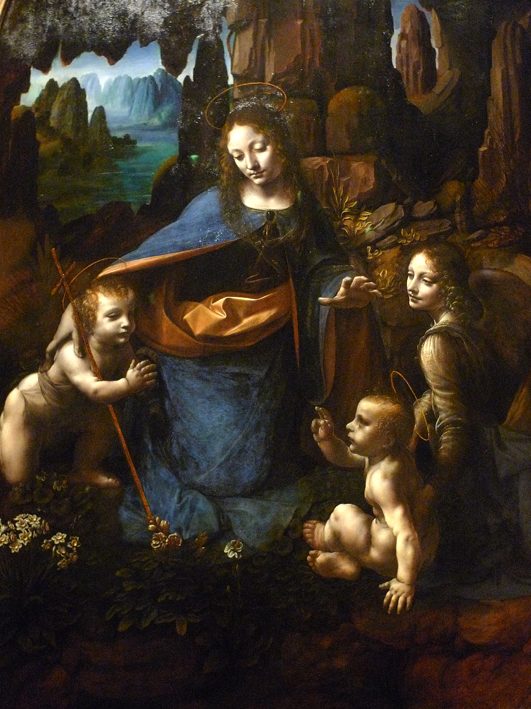 The Lady with an Ermine (1489-90), portrait of Cecilia Gallerani (she was 15 years old at the time of the painting), one of Sforza's mistresses. On loan from the National Museum, Cracow. 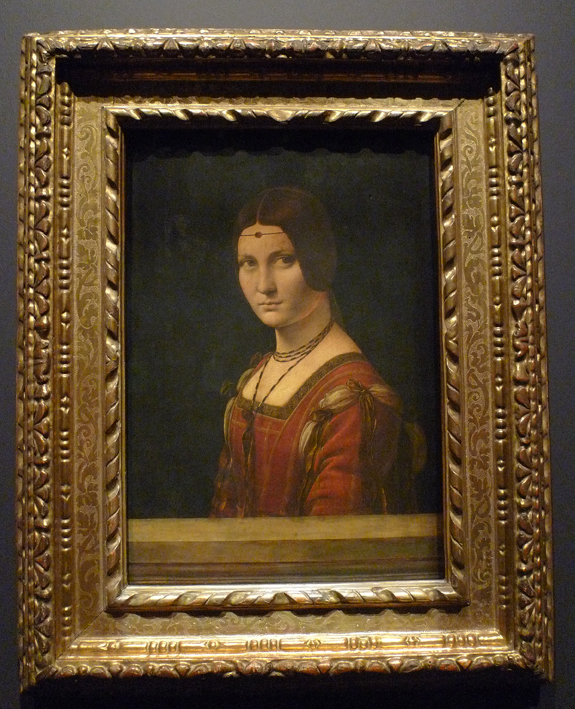 Portrait of a Woman (La Belle Feronniere) 1493-4. Portrait of Beatrice d'Este, the wife of Ludovico Sforza. On loan from the Louvre.

Portrait of a Young Man ('The Musician') 1486-7. On loan from Veneranda Biblioteca Ambrosiana, Milan. 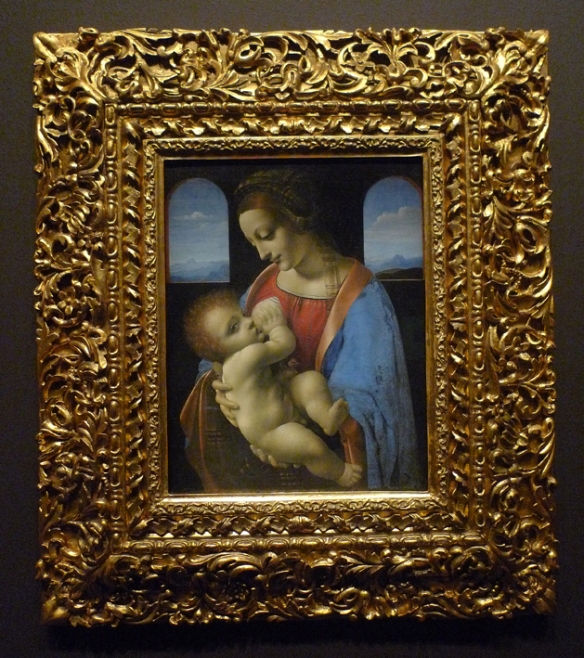 The recently discovered 'Christ as Salvator Mundi'. The painting changed hands in 1958 for £45 and is now valued at £126m.

The works have been lent by galleries and private collections worldwide  – (Paris, Milan, Washington DC, New York, Cracow, Vatican City, Berlin, Madrid, Frankfurt, Vienna) and over 30 drawings are on loan from Her Majesty The Queen whose personal stamp appears at the bottom of the portrait. 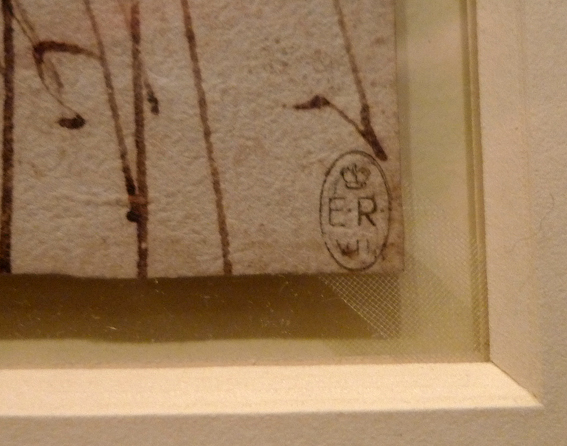 'ER' stamped on the portrait showing clearly in whose private collection this resides.

‘The Madonna of the Yarnwinder’ which was famously stolen from the 9th Duke of Buccleuch’s Drumlanrig Castle in 2003  is also on view.   The painting, reputedly worth in the region of £50 million, was recovered in 2007, a month after the death of the Duke and has now been loaned to the National Gallery of Scotland by his son.

Don’t expect to see the ‘Mona Lisa’ (it wasn’t painted during the Milan period, not that I imagine the Louvre would consider letting it out of its sight) nor ‘The Last Supper’ which is too fragile to travel/stuck to the wall in Milan.  There is however a full scale nearly contemporary copy of ‘The Last Supper’ in oils, and a very good photographic reduced reproduction of the original, which can be seen alongside the  preparatory drawings in the Sunley Room where the exhibition continues;  giving one an opportunity to stretch ones legs and be reminded of the wealth of paintings the National Gallery has on permanent display free of charge.

The Exhibition is staggering.  A great achievement for the National Gallery, much for scholars and art lovers alike.  Comforting to know that even the genius polymath that was Leonardo struggled at times with the freelance world and had trouble finishing projects.

‘That figure is most praiseworthy which best expresses through its actions the passions of its mind.’ Leonardo da Vinci.